Myanmar leader defending country against charges of genocide over 2017 crackdown on the Rohingya, filed by Gambia.

Aung San Suu Kyi arrived at the International Court of Justice (ICJ) in The Hague on Tuesday for a highly anticipated genocide case against Myanmar.

Wearing traditional dress, the country’s civilian leader, who was awarded the Nobel Peace Prize for her struggle against Myanmar’s military dictatorship, did not speak to reporters as she entered the UN’s top court.

She is due to make her comments defending Myanmar in court on Wednesday.

She arrived at Amsterdam’s Schiphol airport on Sunday alongside Wouter Jurgens, the Dutch ambassador to Myanmar, and was greeted by a handful of supporters.

Several demonstrations, for and against her, are expected to take place in the coming days in the Dutch city.

The case, the first international legal attempt to bring Myanmar to justice over alleged mass killings of the Rohingya minority in 2017, comes after the Gambia on November 11 filed an application at the ICJ, accusing Myanmar of violating the 1948 Genocide Convention.

EXTRAORDINARY VIDEO from a #Rohingya camp in #Bangladesh of #refugees chanting “GAMBIA, GAMBIA!” ahead of this morning’s @CIJ_ICJ genocide trial. pic.twitter.com/WP1LwHDJYu

Aung San Suu Kyi’s office has said she would participate in the hearing and lead her country’s team to “defend the national interest”.

More than 700,000 Rohingya, a mostly-Muslim minority, fled to neighbouring Bangladesh after a bloody crackdown in 2017 by the Myanmar military, which UN investigators have concluded was carried out with “genocidal intent”.

Reed Brody, a commissioner at the International Commission of Jurists, who was instrumental in the prosecution of former Chadian President Hissene Habre, “It’s totally unprecedented for a top political leader like Aung San Suu Kyi to take a leading role in a legal case at the ICJ.

“Legally it could be counterproductive for Suu Kyi to assume such a role since it looks like she is politicising the case.

“The ICJ oozes tradition and diplomatic protocol and I doubt the judges will be impressed by tour groups arriving from Myanmar to support the government.”

During the three-day hearing, the Gambia’s legal team will ask the ICJ judges for “provisional measures” to protect the Rohingya before the case is heard in full.

Myanmar has long denied accusations of genocide and most allegations of targeted military-led violence, saying that its actions were meant to protect the country against Rohingya “militants”. It has promised to punish soldiers involved in cases of wrongdoing.

Several world leaders, rights groups, international observers and Rohingya survivors claim otherwise; that Myanmar has carried out systematic, violent and sometimes sexual and deadly abuse against thousands of Rohingya – including children – while denying members of the ethnic minority citizenship rights.

Aung San Suu Kyi has been widely criticised for remaining mostly silent on accusations of anti-Rohingya violence, and more recently on a mobile phone blackout imposed on parts of the majority-Buddhist Southeast Asian country.

Marzuki Darusman, the head of a UN fact-finding mission on Myanmar, warned last month that there was “a serious risk of genocide returning” against the Rohingya still living in the country.

The team from the Gambia, a tiny Muslim country, says Myanmar’s anti-Rohingya attacks are “genocidal in character because they are intended to destroy the Rohingya group in whole or in part”.

International lawyer Priya Pillai said Gambia’s case represents “a significant step in the quest for accountability”, but noted, “success at the ICJ is far from guaranteed”.

Unlike the International Criminal Court (ICC) or domestic courts, an individual cannot sue or be sued at the ICJ, which is also known as the World Court.

Cases before the ICJ determine whether a state breached a law.

“The court will read out the application and will set deadlines for the parties,” Ilias Bantekas, a professor of law at Hamad bin Khalifa University in Doha, Qatar, told Al Jazeera. “If Myanmar challenges the claims until the bitter end, the final judgement on the merits and reparation could take as long as five years.

“The best the victims can claim from this is an acknowledgement of the type of mass crime committed and an authoritative record of events.

“Moreover, a formal apology to the victims may be requested by the ICJ, as well as some form of collective compensation, through the applicant – Gambia, which may even consist of a return and healthy resettlement, along with the granting of a large array of collective rights to the Rohingya, for example, regional autonomy, the protection of religious rights and representation in parliament.”

Navanethem Pillay, an experienced South African judge and former UN high commissioner for human rights, and Claus Kress, a German law professor, have been appointed as ad hoc judges in the case. 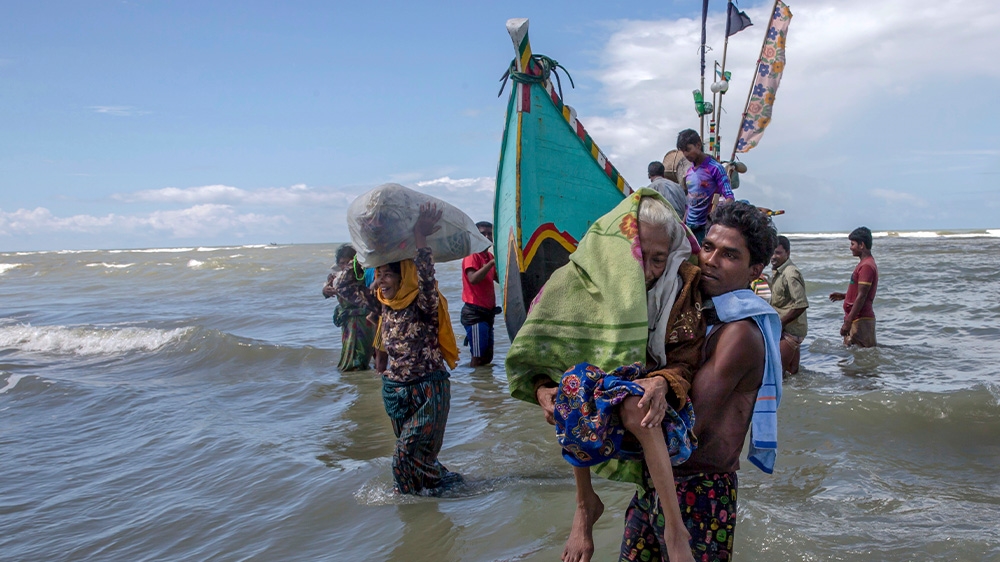 Hundreds of thousands of Rohingya fled Myanmar in the wake of the 2017 crackdown [File: Dar Yasin/AP Photo]

Experts are divided over whether the ICJ is a suitable court to hear a genocide case.

Susan Karamanian, a professor at Hamad bin Khalifa University and genocide expert, said the Genocide Convention explicitly grants the ICJ jurisdiction to hear disputes relating to the “interpretation and application” of the treaty.

“The evidentiary issues could be a challenge and it will be interesting to see if the ICJ comes up with a creative way for a full evidentiary record to be developed,” she said.

Philippe Sands QC, a professor at University College London and counsel to the Gambia in the case, told Al Jazeera that the ICJ is “the guardian of the Genocide Convention”.

With regard to the question of relief for victims, Sands said: “It will be for the court to decide, on the basis of the evidence before it, and the legal argument presented, whether the conditions to order provisional measures are met.

“The UN and other independent investigators have presented clear conclusions that genocidal acts against the Rohingya group in Myanmar have occurred and are continuing to occur.”